Pakistan are leading the series by 1-0.

After losing the first match of the series, the visitors Sri Lanka will look to make a comeback and win the second T20I match against home-side Pakistan. The match is slated to be played at the Southend Club Cricket Stadium, Karachi on May 26 (Thursday). After the second match, the third and final match of the T20I series will be played on May 28 (Saturday).

Talking about the first match, the visitors Sri Lanka could only manage to score 106 runs in their allotted 20 overs. In reply, the Women in Green chased down the target easily after losing just four wickets and with ten balls to spare. The home team will be looking to win the second match and seal the series as well.

The pitch at Southend Stadium is assisting the slow bowlers and the skipper winning the toss might want to have a bat first and post a competitive total to defend it later. As it is a day game, the dew factor is not expected to play a part. A score of 130-140 is expected to be a winning total on that pitch.

Sri Lanka skipper Chamari Athapaththu only managed to score six runs in the series opener and will want to improve her performance with the bat in the upcoming match. Athapaththu holds a lot of experience and has played some mesmerizing knocks in the past. The left-handed batter will want to provide a good start to his team in this encounter.

Left-arm spinner Anam Amin was the pick of the bowlers for the home side in the first T20I. The 29-year-old scalped a total of three wickets and gave away just 21 runs in her four-over quota. Coming to the second match, she will definitely want to emulate her performance. 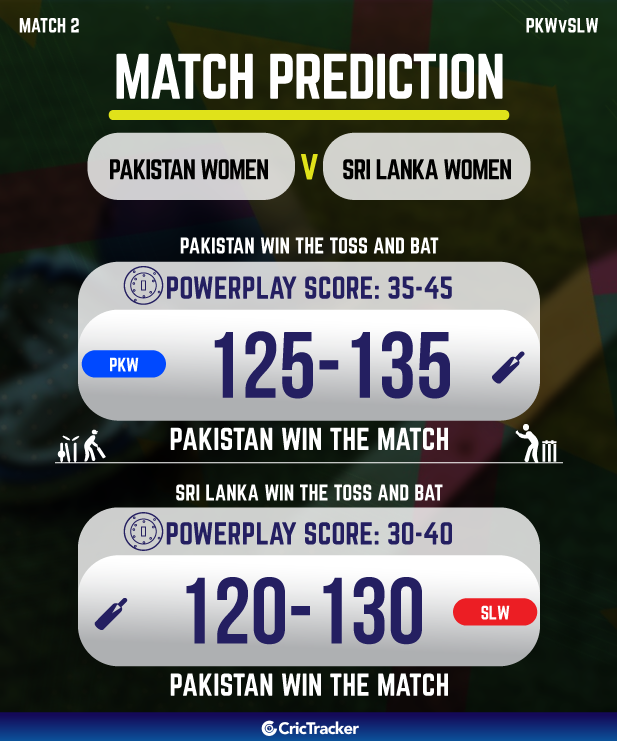 Disclaimer: This prediction is based on the understanding, analysis, and instinct of the author. While making your prediction, consider the points mentioned, and make your own decision.