Man City boss Pep Guardiola has hit back at criticism of his squad’s character from Patrice Evra and Dimitar Berbatov by saying, “I did not see this personality when I destroyed them” in two Champions League finals.

Evra and Berbatov were part of the United squads which were outclassed by Guardiola’s Barcelona in the 2009 and 2011 Champions League finals, tasting defeat on both occasions.

After City crashed out of the Champions League semi-final at Real Madrid following a Rodrygo double inside a minute at the Bernabeu, Evra claimed they lacked leaders because Guardiola “can’t train people with personality” and Berbatov suggested it was the capitulation of a “small team”.

City shrugged off the disappointment of the dramatic defeat in Madrid by scoring five goals in consecutive games against Wolves and Newcastle to leave themselves in a commanding position in the title race.

But the criticism from the former United players was still fresh in Guardiola’s mind when asked about City’s recovery from that result and the character they have shown, as he unleashed a scathing response.

FREE TO WATCH: Highlights from Wolves’ match against Manchester City in the Premier League

“It’s the same character and personality that we lost in Madrid in the last two or three minutes,” said Guardiola of his side ‘s form in the Premier League since his trip to Spain.

“Former players like Berbatov, Clarence Seedorf and Patrice Evra and these types of people were there, and I played against them. I did not see this kind of personality when I destroyed them, we destroyed them, in the Champions League final against United .

“It’s the same character and personality. You can not have personality because we conceded two goals in one minute when we have two chances to score?

“And after the last four games, we score 22 goals, and we have an incredible personality.”

Nev: KDB response to CL exit has been wonderful

“What Kevin De Bruyne did [at Wolves] was exceptional, “Neville told the Gary Neville Podcast.

“It continues to be exceptional. The reaction of Kevin de Bruyne leaving the Champions League was wonderful, Man City went out of Europe in the most devastating fashion.

“It’s saying: ‘we have recovered, we are taking it in our stride, and we are going again.’ They have stepped ahead.Great club in a great moment, do business silently and at the right time and early.

“City have been a great club for the past five seasons. It looks like they are going to win four leagues. They have a big game on Sunday at West Ham. They still have a hiccup – it’s whether that hiccup is going to be enough for Liverpool, that’s the thing.

“That goal difference has extended more than what Liverpool would have liked even if City do lose. There is still something to play for, I do not think the league is over- but Kevin De Bruyne has responded brilliantly over these past two matches. “

Laporte became the latest injury concern at the heart of the City defense after suffering a knee problem at Wolves on Wednesday, joining Kyle Walker, John Stones and Ruben Dias in the treatment room.

“They are in treatment and we’ll see tomorrow who is available. Until the day of the game we will not be able to decide the availability of the players,” Guardiola said.

He said: “We need four points to be champions. Win at West Ham and it will be almost done.” 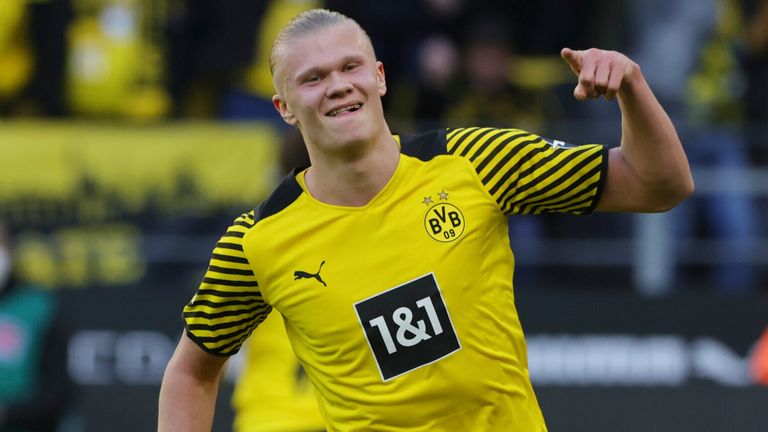 In light of his move to Manchester City, take a look at Erling Haaland’s best goals from his time in the Bundesliga with Borussia Dortmund

Erling Haaland has a release clause in his Man City contract that can be triggered part-way through his five-year deal.

City agreed a deal to sign the striker for £ 51m from Borussia Dortmund earlier this week. 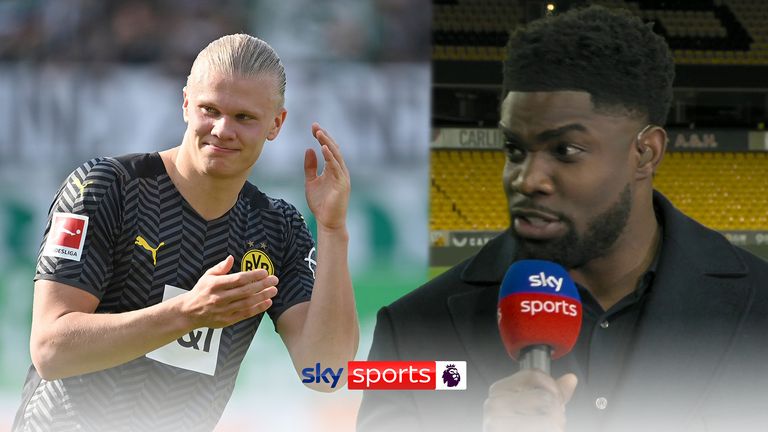 Micah Richards could not hide his excitement over Manchester City’s signing of Erling Haaland, believing they have pulled off a massive coup by paying only £ 51m

Sky Sports News understands that the clause is in excess of € 150m.

Man City are comfortable with the clause being included in the 21-year-old’s deal given the size of the fee required to trigger any sale – which would be a club-record sale.