Although the Representations and Warranties Insurance (RWI) market is relatively small, it’s rapidly developing. In this market update, we will review the latest figures on pricing and quote rates, discuss challenging deals in the market, and have a look at the findings of a recent American Bar Association (ABA) deal point study in relation to interim breach coverage.

It’s true that the RWI market is very reactive to changes in submission flow. This spring, we saw an uptick in deal activity and, with it, an increase in other key statistics for the RWI market.

We are now well into the second quarter, and the RWI market continues to refine. Submission numbers increased slightly in May, and we saw a quick reaction from the insurance market.

As we can see from the chart below, the market has responded with alacrity to this change in conditions. We saw slight increases in the average quote; at the same time, we saw a slight decrease in the average number of quotes per deal. In addition, the lowest quote was slightly higher, and the highest quote was materially higher.

Overall, the news is consistent for our clients and prospective clients—today’s RWI deals will have reasonable pricing and a strong number of quotes; however, deals that are considered more challenging will pay a premium.

What Makes a Deal Challenging?

Let’s examine what deals are challenging in today’s RWI marketplace. 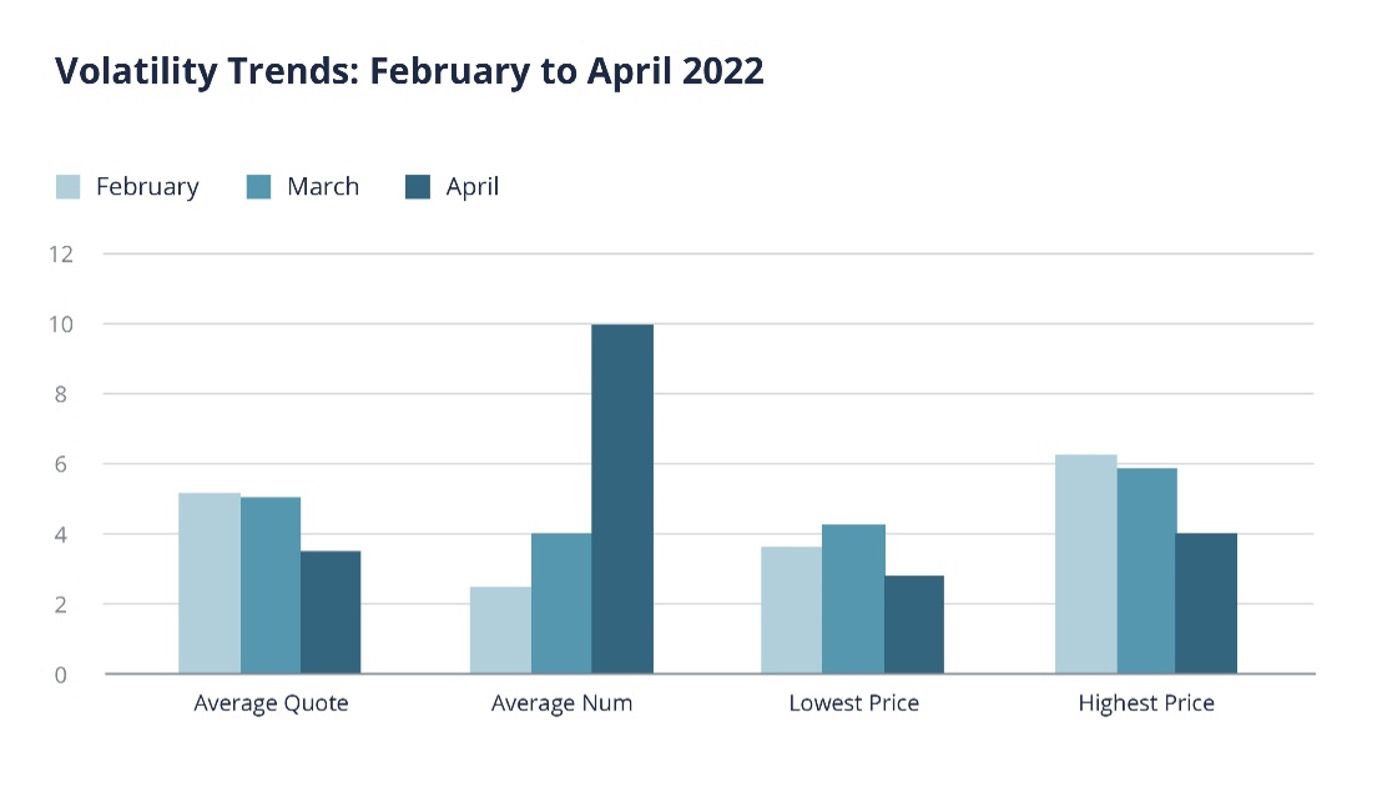 ABA Deal Point Study and the “Sign to Close” Conundrum

The ABA deal point study is a treasure trove of insight into the RWI market. One of the areas of note in the 2022 study concerns “sign to close” coverage. 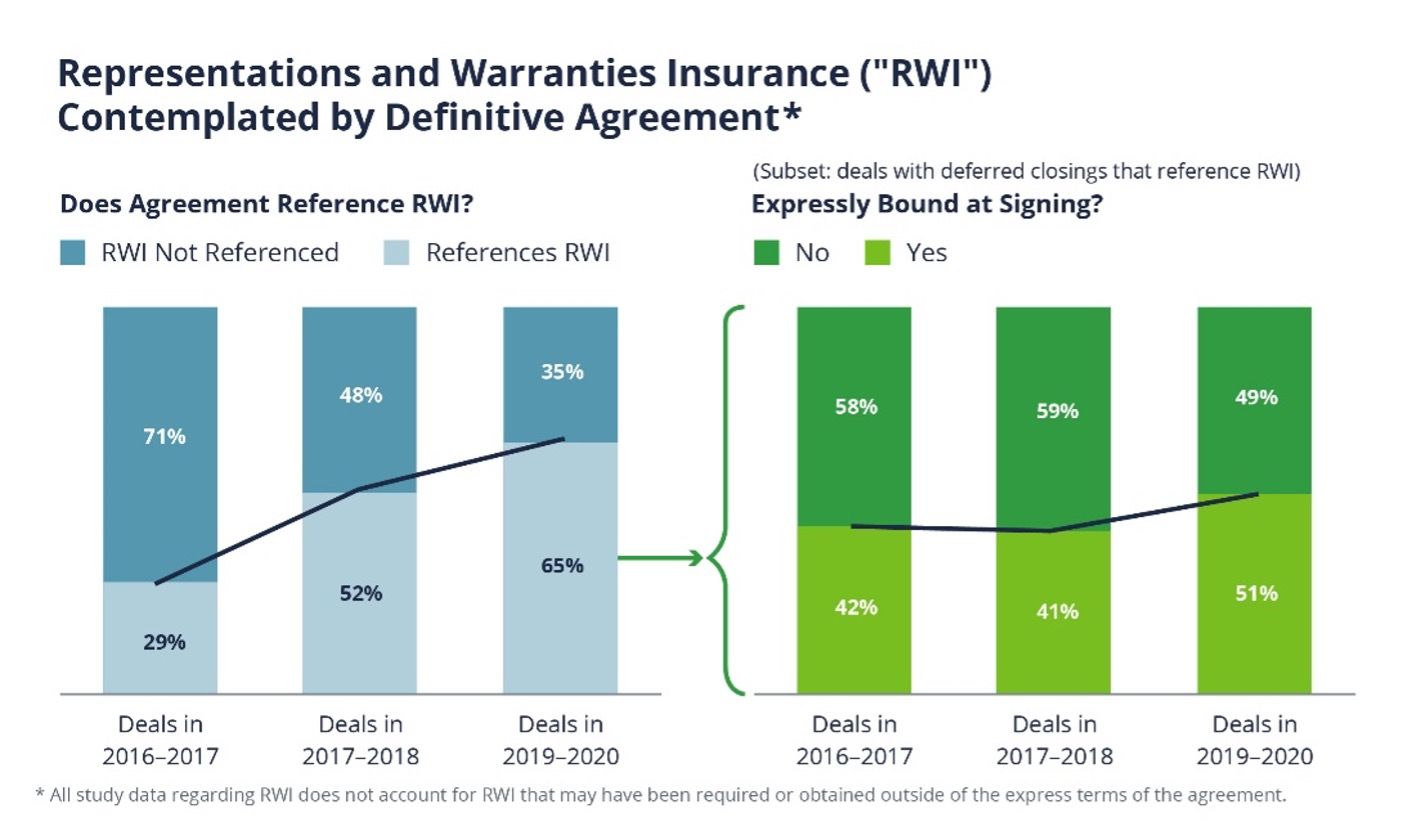 As you can see in the graph, not only did the number of deals with RWI rise for the third time in a row, the express provision that the RWI be accepted at signing is an increasing phenomenon. The issue of “sign to close” coverage is a complex one in RWI.

This gap can range from only a few days to, in rare cases, longer than a year. Most markets will give “sign to close” coverage for approximately 90 days as standard. In this scenario, you have the standard diligence call prior to signing and a “bring down call” a few days before closing where the underwriter catches up on any outstanding issues, any conditions waived, any breaches detected, and how the flow of communication and information between the seller and the buyer has been during this period.

If the period is extended, the underwriter might ask for some of the due diligence to be refreshed, especially around financial reps. In this situation, the insurance is accepted at signing because the underwriter will have taken on some risk for breaches during that period.

The underwriter must make a distinction between what is considered an RWI breach and what falls into the category of “business risk.” Therefore, the coverage includes the following:

Here’s an example of a legitimate claim. Let’s say an employee brought a claim that they had been promised larger amounts of shares in the company over the last couple of years based on a particular formula. They had not received those shares and were threatening to Sue.

The underwriter’s initial response was that this situation fell into the third category and was a breach that both occurred and was discovered between sign and close because both the complaint and the potential breach of this person’s employment agreement happened exclusively in the interim period.

Our counterargument was that the breach was the failure to grant the shares, and we were able to provide emails from the employee to both HR and the board of the seller bringing the same allegations and going back at least 18 months prior to the signing. In this way, we were able to connect the breach to actions prior to the signing but only discovered, by the buyer, between sign and close. This evidence was accepted by the underwriter.

Another example of a legitimate breach is one that occurs between sign and close but is not discovered until after close. Here’s an illustration. Communication from a customer of the target to the seller that they were not planning to continue working with them was received in the sales department. However, it was not noticed by the right people involved in the transaction and therefore not communicated to the buyer in the interim period. As a result, the buyer knew nothing until after the deal had closed.

Unfortunately, this type of discovery between sign and close does occur. A classic example is a cyberattack.

The issue of “sign to close” or “interim breach” coverage is a tricky one. The fact that we have increasingly seen outlines in Sale and Purchase Agreements (SPA) of when and how an RWI policy is accepted i points to the growing sophistication and understanding of RWI in the deal world.