“On behalf of the USA Basketball Women’s National Team Committee, I’m thrilled to add Mike, Kara and Joni to the 2022 World Cup staff alongside Cheryl Reeve,” said Jen Rizzotti, chair, USA Basketball Women’s National Team Committee. “As a staff, this talented team brings decades of coaching experience to the bench. I’m looking forward to watching each coach’s knowledge and unique skill positively impact the team in both our preparations and then a very competitive World Cup. I know this staff is committed to bringing home a fourth consecutive World Cup gold medal and am excited for the journey to Sydney.”

“It’s a great honor to be part of USA Basketball and having the opportunity to work alongside some of the most talented and respected coaches in the game makes the experience even more special,” Reeve said. “I’m looking forward to working with Mike, Kara and Joni as we prepare for the 2022 FIBA ​​World Cup.”

Thibault boasts nearly 30 years of coaching experience with USA Basketball, with assignments dating back to 1993. On the women’s national team level he has served as an assistant coach with gold-medal-winning teams at the 2008 Olympic Games and 2007 FIBA ​​Americas Championship, as well as the bronze-medal-winning group at the 2006 FIBA ​​World Cup.

Thibault has an illustrious coaching background in the WNBA and currently serves as the head coach and general manager of the Washington Mystics, a position he’s held since 2012. With 374 career wins over a 20-year head coaching career with the Mystics (2013-present ) and Connecticut Sun (2003-2012), Thibault is the winningest coach in WNBA history, a three-time WNBA Coach of the Year (2006, 2008, 2013) and a WNBA champion (2019).

Lawson began her USA Basketball career as an athlete in 1998, winning the bronze medal at the USA World Youth Games. Through her tenure as a player, Lawson captured gold medals at the 2008 Olympic Games, 2007 FIBA ​​Americas Championship and the 2001 World University Games.

As a coach, Lawson has served as a court coach at the 2022 USA Basketball Women’s National Team’s spring training camp in Minneapolis and has had several head coaching roles with 3×3 junior and senior national teams since 2017. Lawson has led her teams to seven 3×3 gold medals, including at the 2020 Olympics, 2017 and 2019 FIBA ​​3×3 U18 World Cup and 2018 Youth Olympic Games.

Lawson has been the head coach at Duke since July 2020. Prior to arriving in Durham, Lawson was an assistant coach with the Boston Celtics for the 2019-20 season.

Taylor, who recently served as head coach of the 2022 USA Women’s U18 National Team that won gold at the 2022 FIBA ​​U18 Women’s Americas Championship, will undertake her fifth USAB assignment. Her previous USA Basketball experience includes twice serving as a court coach, including at the April camp in Minneapolis.

Taylor was announced as the new Texas A&M head coach on March 23, 2022. Previously, she spent seven seasons as the head coach at Georgia, where she compiled a 140-75 record, posted seven winning seasons and advanced to the NCAA Tournament four of the six years it was held.

“I’m very excited to see this incredible group of coaches lead the 2022 Women’s National Team on the world stage this fall in Sydney,” said Gen. (R) Martin E. Dempsey, chair, USA Basketball Board of Directors. “I thank each of them for their continued commitment to USA Basketball.”

The 19th FIBA ​​Women’s Basketball World Cup will take place in Sydney from Sept. 22 to Oct. 1. The USA will compete in Group A and face Belgium in their opening game. For the full schedule, click here.

As three-time defending FIBA ​​World Cup champions, the USA has claimed a record 10 gold medals, one silver medal and two bronze medals, and owns a 109-21 record all-time in World Cup play since the event launched in 1953. 2018, the US finished with a perfect 6-0 record and a gold medal finish over Australia.

For more information and to buy tickets for the 2022 FIBA ​​Women’s World Cup, click here. 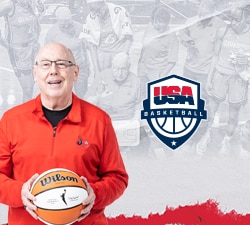