Be cautious about jumping in with a huge position until you get reasonable confirmation for your trade.

The West Texas Intermediate Crude Oil market fell during most of the session on Wednesday but did see a bit of recovery late in the day. What’s interesting is that people are suddenly focusing on the lack of demand due to the recession, which is something that you would have thought had to cross their minds before. However, it does not look like it has, so we had a little bit of panic selling. It looks as if the crucial $100 level has held though, and that’s probably more important than the uptrend line.

This is going to come down to demand, and whether or not good signs of reopening in China are enough to overcome recessionary fear in the West. I think at this point it’s going to continue to be a bit of a battle, but it is worth noting that the commodities markets have seen sudden selling pressure and natural gas and copper as well, both markets that had previously been doing fairly well. There’s an old expression, something about shooting generals when things get bad. That might be what was seen here, so you will most certainly have to pay close attention to this market.

If we were to break down below the $100 level, that could change a lot of attitudes, perhaps even have people start to short this market. As things stand right now, I’m not necessarily comfortable shorting this market because we are still very much in an uptrend, and it is worth noting that there was a significant attempt to save the market today. If we can break above the $110 level, then I think the overall uptrend continues, perhaps strong enough to make a run toward $120 above.

You will have to keep an eye on inventory numbers, some of which come out on Thursday, employment numbers, GDP, consumer sentiment, and everything else in the world right now that seem to be throwing the markets around. If we are in fact going into recession, one would think that oil has only a limited amount of upside, but right now it looks as if nothing has changed, at least not enough to change the overall attitude of this market, so be cautious about jumping in with a huge position until you get reasonable confirmation for your trade. 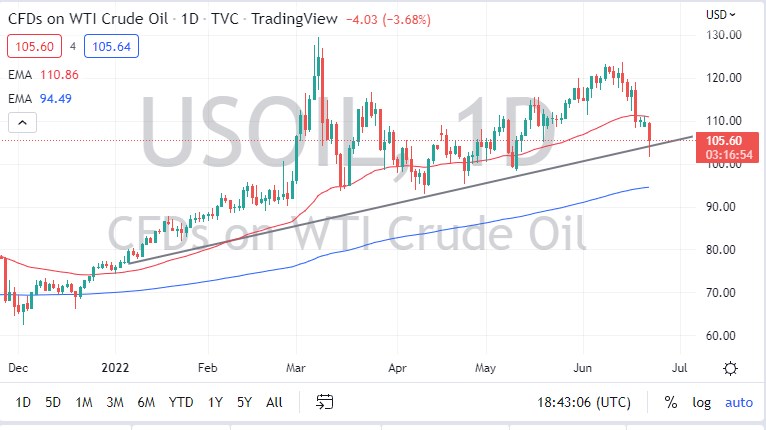